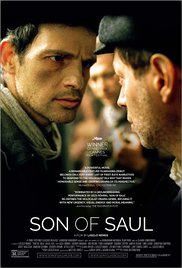 Winner of the 2016 Academy Award for Best Foreign Language Film

“October 1944, Auschwitz-Birkenau. Saul Ausländer is a Hungarian member of the Sonderkommando, the group of Jewish prisoners isolated from the camp and forced to assist the Nazis in the machinery of large-scale extermination. While working in one of the crematoriums, Saul discovers the body of a boy he takes for his son. As the Sonderkommando plans a rebellion, Saul decides to carry out an impossible task: save the child's body from the flames, find a rabbi to recite the mourner's Kaddish and offer the boy a proper burial.”

“Son of Saul…plung[es] its viewer directly into the heart of a concentration camp.”

Amy Simon (William and Audrey Farber Chair in Holocaust Studies, MSU) Ken Waltzer (History Professor Emeritus, MSU) will introduce the film, provide comments at the conclusion, and then lead a discussion about the film.